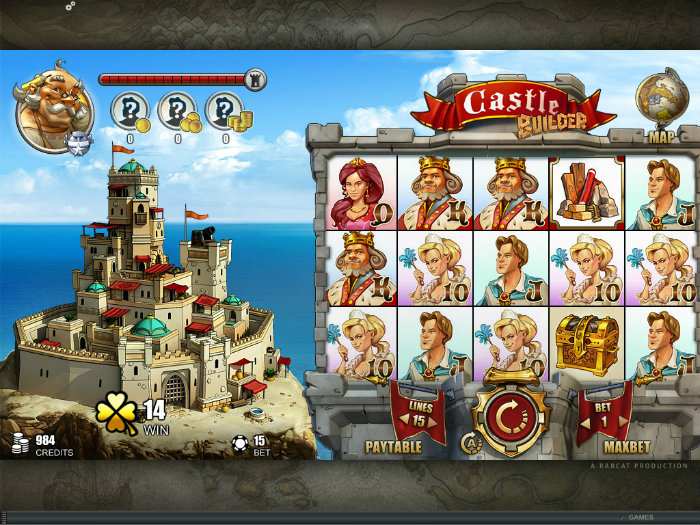 Necessity is the mother of invention, so the saying goes and while online slots remain a thriving industry, it is always good to bring something new to the table and in January 2015 that is precisely what Microgaming have done, in conjunction with their new partners RABCAT.
On the 7th January, the company released the Castle Builder slot into casinos and it has already proven to be one of the most popular new slots released in many months. The reason? Castle Builder is a new type of game; a level-based slot.

On the face of it, Castle Builder is a 5×3 slot which can cost between 1 and 15 coins per spin across each of the 15-paylines. It has the usual wilds and scatter symbols, but it is how the slot uses them that marks it as different.

Wilds are still used in the traditional fashion to create winning lines, but the scatters are building materials, which are collected over spins to help build a castle.

Once the castle is completed one of the kings’ daughters moves in and must decide upon a husband. Select wisely, as pick the pauper and you will not get as big a return as you would have done had you picked the wealthy option or the middle-money man.

Once the level is complete then you move onto the next level where a bigger and more elaborate castle, requiring more building materials is to be built. Progress through the game and you can build many castles and marry off many daughters, earning a potential big pay out as your progress deeper into the game.

The added attraction of levels and an in-game map to show your kingdom only adds to the game element of the slot and will appeal to gamers as well as slot enthusiasts.

Castle Builder offers us a glimpse of how slots could develop in 2015 and beyond into becoming more than simply slot games. Will it change the face of slots for 2015 and beyond? Only time will tell.