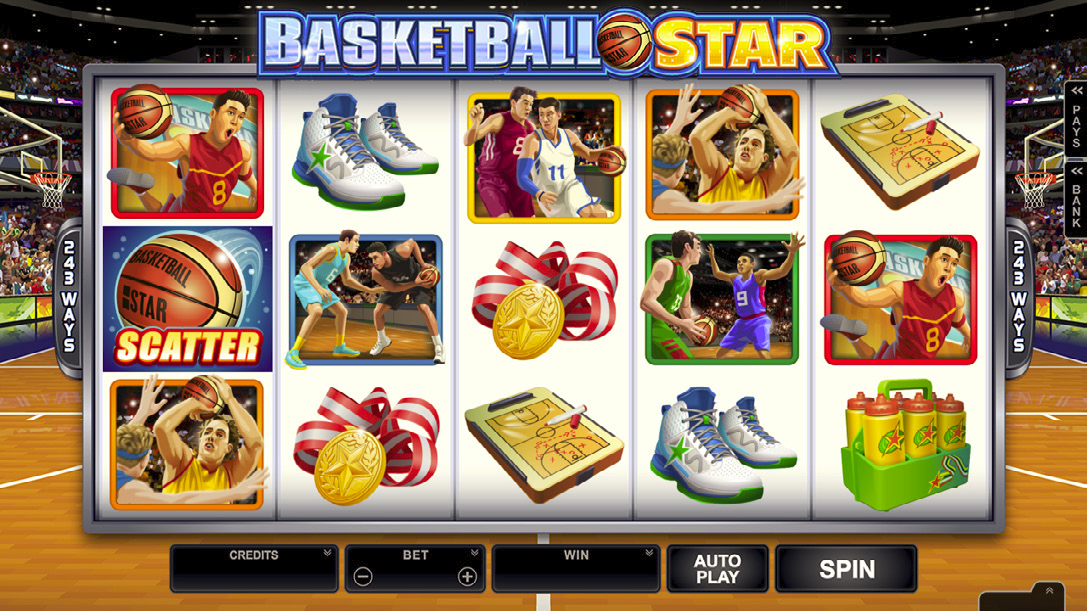 Most people have heard of the famous Harlem Globetrotters, those expansively skilled practitioners of Basketball for whom the show is more important than the actual result. Long seen as a form of Basketball excellence, they have a new rival for that title in the superb new Basketball Star slot from Microgaming.

This autumn released slot offers the player a total of 243-ways to win on every spin and it comes packed with a number of features all of which can combine to help the player land an enormous win, with a 120,000 coin jackpot possible for the biggest winner.

On court permanently in this slot is the superb Rolling Reels feature which sees any winning payline explode and disappear, allowing reels above to drop down into the empty space and create a whole host of new, potentially winning combinations.

Another base game feature is the randomly triggered Wild Shot game. This can occur at any point in the base game and when it does, up to two reels are turned entirely random and the player is guaranteed a win.

Better still, once you receive your Wild Shot win, the Rolling Reels feature kicks in potentially exploding entire reels and allowing you even more chances to win.

Of course, the game is packed with symbols and all of them are related to the game of Basketball, but of all the symbols on the reels, one you may want to pay close attention to is the Basketball scatter symbol.

Land three, four or five of these across the reels during the base game and you will trigger a Free Spin round with 15, 20 or 25 free spins respectively. Not only that, a Multiplier Trail feature also starts with the chance for the player to increase their win from 1x the amount up to a maximum 10x the original payout.

With such a massive jackpot and spins starting at just 0.50 per spin, Basketball Slot is certainly well worth being tipped off about this November.